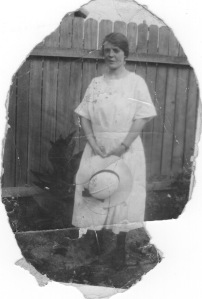 A love story with thanks to Anton Chekov and my great grandmother Edith.

The door suddenly opened and my good friend Edie entered our large shared room located at the back of our employer’s house. Since arriving by ship twelve months ago we had worked as domestics for a solicitor in Sydney. Edie was diminutive with a square jaw and pointed chin, her fine brown hair plaited and pinned neatly under a hat. Her hazel eyes looked red from crying.

‘What has happened to you’ I asked watching as she unbuttoned her thick wool coat she had received during our WAAF days. She was very careful with her few possessions. She turned toward me and after hesitating a moment sobbed ‘I am in terrible trouble Maude, I don’t know what to do.’

‘But what can have happened? This morning you were in good spirits.’

I first met Edie in 1917 when we joined the Women’s Auxiliary Air Force (WAAF) and served at the Third Australian Auxiliary hospital in Dartmoor. We liked the Australian soldiers. Their relaxed style and black humour that challenged the taboos of the British class system.

‘I have fallen pregnant. This will ruin everything we had planned to do together’.

We had agreed to work as domestics for two years in return for the £10 fare to Australia. Edie wanted to escape her ruthlessly demanding mother and I wanted adventure and to share a good time with Edie. The seven weeks on the ship was wonderful. Unused to being waited upon we danced to the music of the ship’s orchestra until the early hours of the morning. This was Edie’s first holiday.

On board ship we became the terrible six; with our friend Scottie and irrepressible John, quiet Frank and smooth seductive Alfred with his olive complexion, bow ties and dangerous flirtations. I had seen Alfred’s type before and was wary. He entranced Edie although he was at least 10 years older and there was gossip of a wife and child back in England. He whispered sweet nothings in her ear and danced with her, showering her with complements and stealing kisses when he could. She had never had such attention from a man. Maybe, I thought unkindly, she was easy-pickings for such a wolf but I should have warned her.

The ship took us to another world. We stopped in exotic places some of which Edie surprisingly knew. She was born in Gibraltar, her mother was Spanish and her father a Sergeant with the 1st Battalion of the South Wales Borderers stationed there. Her father was posted to India after Edie’s birth and at 36 died of enteric fever leaving her mother with four small children.

We loved the bustle of Sydney and the excitement surrounding the building of the Sydney harbour bridge, rising like a great skeletal whale out of the rocks and across the bay attracting crowds and artists to record its emerging iconic image.

On Sunday afternoons we travelled on the tramway to the Rocks where we would sit on the grass near the bay with the sun on our backs looking at the boats and sparkling water. We were such a long way from Britain’s gloom.

Edie would reminisce about her time in India when her father was alive, the privileged lifestyle and love for her Indian nanny. Then she might talk about times of great poverty and why she could never forgive her mother for sending her into service at 14 and demanding all her wages.

‘Not to be accused of complaining,’ she would say cheerfully ‘let me tell you about the wonderful year I spent working for a family on Isle of Wight, whose long stretches of beach and warmth remind me of Australia’.

My circumstances were very different as my father was a respectable shopkeeper and I started work at 17 when I joined the WAAF. Edie and I looked after each other when shocked by the terrible injuries of the returned soldiers. We occasionally saw similarly wounded men around Sydney and hoped that no one would forget the loss and suffering of the Great War.

Edie was a shy, private woman who I could not imagine being compromised. She had a carefully calibrated goodness, which must have been more fragile than I suspected. Alfred and Frank would meet us at Saturday night dances but I did not know that the friendship had gone beyond flirtation. Edie explained to me that sometimes she met Alfred outside his lodgings and this was when it had happened. She said she knew it was wrong but she couldn’t resist his charm.

We had both talked about reinventing ourselves and I felt a flash of anger at Edie’s misjudgement and naiveté.

‘So what will you do Edie?’ I asked keeping my anger to myself.

‘I don’t know. Alfred told me today that his wife and child are due to arrive from Britain in a few months. I will have to forget him. He even suggested I get rid of it. Then he had the gall to give me a photograph of himself with ‘Yours truly, A. Pickersgill, Father’ written on it. How can he be so cruel?’ Edie was in tears again and I comforted her. The situation seemed hopeless.

‘What about Mrs Wakeley, the solicitor’s wife, she seems kind and trustworthy and may help. You won’t be able to keep working here once you start showing. What did the doctor say?’

‘He was disapproving and looked down his nose at me. I felt so ashamed’.

As Edie left the room to look for Mrs Wakeley I wondered what would become of her. I felt sad for her and would do what I could but I had a small income and really needed the job.

Some time later Edie returned looking pale and exhausted and said Mrs Wakeley said she would take her to speak to the nurses at Montrose Maternity Hospital on Monday.

I was secretly glad that I didn’t have to go, as I would have lost a half-day’s pay and could not afford it.

Edie seemed to have aged when she returned on Monday night and I wanted to give her a hug but for some reason felt she wanted me to stay distant as if she had some terrible disease.

‘Were the people at Montrose helpful’? I was curious to know what they had said. I had heard stories about children being taken from unmarried mothers who were then forced to work long hours. Edie was used to hard work but she did not deserve to be punished.

‘Yes’ Edie answered, ‘they said I could go there and work for them before and after the birth. Mrs Wakeley spoke up for me. They wanted to know if I would keep the baby. They care for babies and encourage mothers to feed their babies as long as they can. They did seem nice and the hospital was clean.’

‘What do you think you will do?’ I asked cautiously

‘I still love Alfred and this is a part of him’, she said tapping her stomach. ‘I know he is not a good man but I can’t help myself. I feel so weak. Maybe he will change his mind’.

I had more experience with men than Edie and knew Alfred would not help. I had become friendlier with Frank who was a considerate honest man, and a hard worker. Nothing exciting but I think he was reliable and wouldn’t stray once he settled on a woman, and that would suit me.

Several weeks later Edie went to Montrose and worked there for at least a year. They helped her look after baby Freddie who was born in April 1922.

Alfred’s wife and daughter arrived in Australia several months before the birth.

Of course Edie was heart broken. The light in her eyes had dulled. She had her long hair cut and her heart seemed to close. She was less inclined to daydream about future adventures.

Soon after Freddie was born and whilst still working and living at Montrose she met Arthur at a dance. Arthur was a small wiry man with tattoos of a cross and bird on his forearms. Originally from Britain his mother had put him in a workhouse at 13. So at the first opportunity he joined the merchant navy, and then transferred to the Australian navy as a stoker. He was stationed on the HMAS Brisbane, which often moored in Sydney.

Arthur was gassed in the trenches during the First World War and I cynically suspected he wanted a mother. I was surprised Edie would even consider him. But Edie had sympathy for his condition and he liked her and agreed to accept Freddie as his own. He married her on Christmas Eve 1923. They had both known extreme poverty and were familiar with the other’s story. They didn’t need to explain themselves and were fond enough of each other. I suppose Edie thought he would bring in a regular wage and he would be away enough for her to cope with the marriage.

We kept up our friendship even after Arthur was posted to Crib Point in Victoria. She told me in confidence years later that she heard Alfred had died on her birthday at the age of 48. She still had a soft spot for him and of course Freddie was a constant reminder of that magic time when she met the love of her life.

One response to “Edie”