The film, Eye in the Sky opens with the statement, ‘In war, truth is the first casualty’ and this alerts us to what is to come. This powerful political thriller engages each of us in questioning the morality of modern warfare and by extension the justification for any war. I am a pacifist.

I thought Mozart’s requiem was the most appropriate music to accompany my review and discussion of the messages in Eye in the sky.

The story focuses on a British-run mission involving American controlled drones and Kenyans on the ground. The mission aims to capture a group of ‘high-value’ Al-Shabaab terrorists who are meeting in a safe house in Nairobi, Kenya. The planned capture becomes impossible when the British and Americans notice, through the aid of a miniature drone, that the terrorists are preparing two suicide bombers. The decision is made to kill the terrorists using a ‘hellfire’ missile shot by a lieutenant in the USA, using a drone positioned 25,000 feet above the house in Kenya. BUT ten-year-old Alia, calmly begins selling her mother’s bread outside the proposed target, and gets in the way of the military operation.

The resultant psychological drama engages the audience by raising all sorts of moral and ethical questions about the use of drone warfare and it’s associated collateral damage. The film is about the implications of modern warfare, when there aren’t armies but armed drones directed at terrorists. The terrorists respond by blowing up crowds of innocent people because they haven’t got an army to fight.

Initially I was fascinated to learn about the intricacies of drone warfare. I was almost seduced by its hypnotic inoculation which appears to avoid the risk of bloody face-to-face warfare. Just like a video game. Then there is surveillance software, which can identify a dead terrorist by taking a photo of their ear thousands of miles away. Similarly algorithms can be used to calculate the possible collateral damage of dropping an aptly named ‘hellfire’ missile on a small community. These frightening inventions help a group of powerful people dissociate themselves from the horror of murdering innocent civilians in the name of fighting terrorism.

There is a stark contrast between the impoverished daily life of ordinary Nairobians and the group of colonels, lieutenants, British MPs and US politicians safely ensconced in their plush offices and hotels with cups of tea and wine.

I was bound to ask, was there ever any nobility in war? Some like to think so. But if one knows anything about the reality of war, the killing, maiming, rape, displacement, starvation and injury of civilians and soldiers is far from noble. Nor can there be a moral argument for the continuing production of more and more destructive weapons when millions in the world are starving, homeless and disadvantaged. War damages the lives of millions of people and doesn’t solve any problems. If it did we would have stopped having them by now.

So one might ask what is the best way to respond to terrorism, and of course there are no simple answers. Waleed Aly and Scott Stephens in their weekly program The Minefield provided a reasoned discussion about the effect of terrorism and breaking the cycle. They ask ‘what personal habits and social virtues should we cultivate in order to stop giving terrorists what they want’? They also discussed the use of drone warfare and its impact on military virtue! Well worth a  listen. Noam Chomsky of Power and Terror fame says, ‘Everyone’s worried about stopping terrorism. Well, there’s a really easy way: Stop participating in it’. His book Necessary Illusions is compulsory reading for anyone interested in thought control in democratic societies and how communities to be encouraged to question the things governments get involved in.

There has been some critique of the film in terms of the credibility of the scenario. I found the scenario convincing especially with the insight it gave into drone warfare, from large unmanned planes to a small humming bird and beetle drone capable of entering a house unseen and beaming a video back over 1000s of miles. Also the use of a missile aptly named ‘hellfire’, which can take out a particular group of people in a particular location. Of course the collateral damage must be calculated and assessed using algorithms-pity the outliers!

The idea that a clean war can be conducted from an armchair with the use of drones is justified by Mirren’s character and also President Obama when he says, ‘the legal architecture around the use of drone strikes or other kinetic strikes wasn’t as precise as it should have been.’ But I agree with Deane-Peter Barker’s argument that ‘this is a test of our intuitions about the morality of war itself, for the fact is that collateral damage is an unavoidable reality of war and will remain so for the foreseeable future. That’s something neither we, nor our politicians, should ever forget.’

An important implication of the use of drones is that if the USA and Britain can have drones why shouldn’t the Chinese, Russians, Saudi Arabians, Iranians or for that matter ISIS have them? In fact China is selling drones to these countries. Where does it stop? Would we accept drone warfare over our cities and towns, and if we would not how can we justify supporting its use overseas?

The taking of a human life is a criminal act. Ethically is it ever reasonable to kill innocent lives in the name of the greater good or does the greater good become tainted by the act of murder? This dilemma is sometimes referred to as the ‘trolley problem‘. Who has the authority to make these decisions? The film raises these ethical questions but does not answer them.

Associated with the idea of ‘kill lists‘ or ‘high-value‘ terrorists, (as if they have lost their humanity by virtue of their political position), is the absence of any reference to judicial process. Someone has the power to make life and death decisions and we the electorate are implicated in any murders carried on in the name of the state we elect. Are we certain they are terrorists. Even the Nazis were granted a trial at Nuremberg after World War 11.

Director, writer and some cast details

Eye in the sky is directed by Gavin Hood and written by Guy Hibbert. UK, rated M, 102 minutes.

Helen Mirren plays Colonel Katherine Powell in charge of the attack, she is clear and decisive about its purpose.

The late Alan Rickman plays Lieutenant Benson who skilfully mediates between the Americans and British demands. The film opens with Benson purchasing a sleeping baby doll for his granddaughter only to discover it should have been a moving one-he asks ‘what’s the difference?’ ‘A lot’ is the response. This scene is meaningfully revisited at the end of the movie. 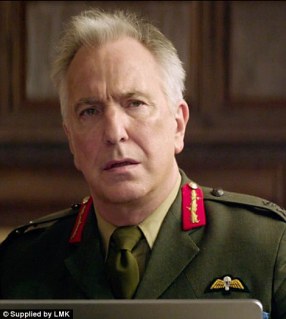 Barkhad Abdi plays the courageous and resourceful Jama Farah, a Somali spy engaged by Kenya. He risks his life multiple times in an attempt to save Alia, while also guiding a tiny mobile phone activated drone into the ‘safe’ house to discover what the terrorists are doing. Interestingly Barked has personal experience of being a child in Somalia after the war.

Aisha Takow plays Alia, the delightful 10-year-old girl selling her mother’s bread outside the safe house and engaging us with her play and study.

John McDonald writes, ‘there’s nothing romantic about sending a robot to deal death from the sky, but that’s OK if winning is all that counts. The Edwardians were perhaps the last generation to view war as a superior form of sport. Nowadays it is simply a matter of getting them before they get you. Is it a problem that we are growing more distant from the actualities of violence and suffering? Treating the entire thing like a video game?’ I would say YES.

The film demonstrates that in the end no-one escapes the effect of his or her decisions. The drone operators and MPs suffer moral trauma because they get to know the community they are spying on, as if they were their neighbours. The colonels are prepared for war and death, that’s what they signed on for but appear disturbed by how the mission plays out! And we, the community, just by being aware of the possibilities, are all implicated in such warfare and the death of innocent civilians.
The writing and acting in this film was excellent. I have mulled over this film for weeks, because of the moral and ethical questions it raises. A film that raises questions and keeps me thinking fits my criteria for a great movie. I was also reminded of the 1964 political satire black comedy film Dr Strangelove and the  the predictions it makes.

I welcome other people’s reactions to the movie and my review. So please let us start a conversation.